So, today I'm subbing at perhaps the most unremarkable school I've ever been in. There just seems to be no life here. I think it's probably an incredibly boring place to be whether you're a teacher or a student, but at the same time it's far preferable to some of the places I've been to so far. You know the schools I'm talking about--the ones which are practically in flames. I'm beginning to think that I'm permanently jaded, and that I will never really find a good school to be in because I hate both chaos and absolute order in the classroom. I don't know if I've ever really seen a school that I liked for long enough to determine whether it was a place I'd want to work...and seeing places for one or two days only just encourages me to make rash judgements about how bad they are. On that note, I'm trying to come up with some unusual indicators of good schools. Here are a few of the ones that I think are most accurate:

I had a discussion with a friend on Saturday about what happens when you run away from where you live to find something else--to find a different way of life. Namely, your old way of life eventually catches up with you. I certainly think that going to LA and Africa would be running away, but at the same time I don't care--I have to get out of places like this. I want to feel some kind of desire to participate in a job somewhere. Because at the moment, no matter what way I slice it, I don't really want a job. None of them seem important or necessary. Particularly not teaching jobs at the schools I've been in.
Posted by Catlard at 4:25 PM 1 comment:

You've not seen nothing.

You should be listening to Rufus Wainwright's "California" while reading this post. Here's a streaming youtube version of it, so you don't have to go through the trouble.

I am moving out of my apartment with Jonna, and I have found a new apartment with some folks living at 5924 23rd Avenue, in Bensonhurst, Brooklyn. Pictures and videos are sure to follow shortly.
I am going to Los Angeles in June, to stay with my friend Ben. I'm moving to another part of Brooklyn until I finish my master's degree, and then I'm quitting this city. Seven years would be too much (we're on 6.7 at the moment, by my count).
The plan is to go and hang in California with Ben until we both have enough money to go abroad somewhere else...somewhere more rural, an Arcadia in Africa or Eastern Europe. I would like to go and work on an organic farm, as I had intended to previously with Jonna...it sounds really nice. I don't know that Ben is looking at travelling the same way as me, but no one says we have to go to the same places and do the same things exactly. We're just looking at it togther.
I need to get to these places to do these things that will relax me before I even think about finding a place to stay for another seven years, and be satisfied. I'm not satisfied with my life as it is; there must be more joy in me than I have known so far. As it stands now, the good times are killing me (PLAGARIZED).
There are friends and family already settled where I am going, as always, so I won't be alone. And Ben lives on a mountain, which dissipates the smog issue. And I'm going to do a slug in a ditch of a lot of biking up hills (no car), which will be great exercise. I'm looking forward to it.
Oh, and finally, the name of my blog will mean something again, as I won't be in New York anymore. I've been waiting for that.
Posted by Catlard at 1:17 AM No comments: 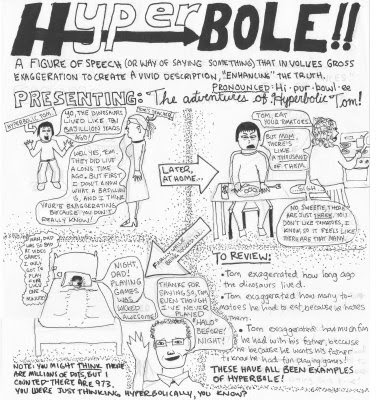 So, I thought I would just let you know that I'm now working with a tutoring company, Bee Tutored. I've got a bio on the tutors page. Check it out!
Aside from this, I've completed a new comic--this time, for hyperbole. It's been a while, but I'm trying to keep at it.
Posted by Catlard at 4:22 AM No comments: