YOUR CHINESE CHARACTER/ETYMOLOGY OF THE FRIGGIN' DAY:
东西 -- Dongxi (Dong - Shee) -- Literally, it means "East West". The story goes that at one time, there were markets on the East and West sides of town. They sold different things. So, if you didn't know what you wanted, but you wanted something from the market, you were said to want SOMETHING from either the east or the west markets. So, it means something.
Also in language learning news, I learned how to say "in bed" in Chinese. You know that joke we always use when opening fortune cookies? Well, I don't think anyone's heard of that here. So I will just randomly interject "in bed" at the end of a statement I don't understand that a friend say, and it invariably gets a laugh. Yes, I've killed jokes before, and I'd do it again if they gave me the chance.
Grrr.
Posted by Catlard at 3:14 AM No comments: 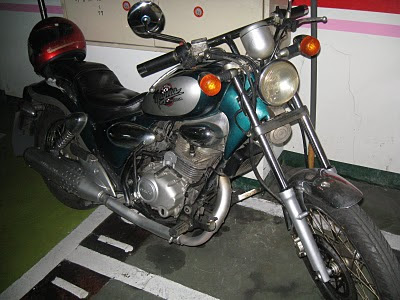 So! Now a more textual update, as I'm officially, consciously back from Indonesia. The general synopsis of this post is the following:
1. I have a motorcycle!
2. Indonesia was eye-opening.
3. Careers are confusing.
Now, in greater length.
1. I have a motorcycle! I took this picture of it yesterday, in the parking garage that's under my apartment. So that means it's a little dark, but you can still see how manly I am now, without my even being in the picture! More photos to follow soon, hopefully with me riding the motorcycle...but don't know when. And, before you ask, yes, the shocks in the front are indeed new! I just replaced them. That was the only thing that really needed changing upon my purchasing the bike. Oh yes, and the engine is 150ccs.
2. So, a disclaimer: I want to present a very balanced view of Indonesia, while at the same time impressing upon everyone that I had a good trip, and that Tina is an awesome travelling partner. Indonesia is a good place to visit as a tourist, if you like that kind of thing--the parts that I visited were well-geared towards making people from other countries feel like they were in another country without giving them the "fish out of water" feeling that so many of us crave when we travel. I was extremely physically comfortable while there, which is what I wanted from a vacation.
All that said, I confess that I didn't go very far off the beaten path. We went to Lombok at the end of the vacation, and that was super interesting to think about and experience on a commercial level. In most places in Indonesia, there are two distinct groups, which seem to be trying to avoid each other--the natives from Indonesia, and the tourists from the Western world (whatever that actually is). This made me feel uncomfortable, because inevitably I was seeing a lot of desire for comfort, culture, and the natural beauty of Indonesia (which is substantial), but to get it, you had to negotiate with a culture which lives in a totally different way and seems to be principally interested in your wallet.
So, in the end, I think the biggest problem I had there was that I felt guilty about being there--as a tourist, pumping money into their economy to see the sights, encouraging Balinese culture to sell out, in a way (I felt). I've never been on a vacation like that. And the constant concern about how much money I was spending for something while I was there was always stressing me out--the question was always, "Am I being ripped off right now?"
To be absolutely clear, Awan and his friends in Lombok were an oasis of good feelings about Indonesia, and I'd really like to hang out more with him (or in that kind of situation) should I go back. Hanging with Awan was really relaxing and fun. Anyway, first trip in Asia!
3. Careers are mightily wily things. I am now trying to figure out what, exactly, one does with one's life when one is tired of only teaching English and wants to either teach or learn about something else well enough to do it as a profession. The most recent development has been research into Technion's Technology Education department, where I'm investigating the possibility of a Masters. Here's the website for the department, should you be interested in doing any Simon-research!
http://edu.technion.ac.il/EngWebSite/index.html
Oh, and I'm also looking at Haifa Institute of Techology's tech dept. But no email back from them, yet!
Posted by Catlard at 1:34 PM No comments:

More specific discussion of Bali and environs later! There are captions on this one. Now must go eat breakfast.
Posted by Catlard at 2:00 AM No comments:

1. Knowing that my cat does not speak English, I accidentally tried to speak Chinese to her today, to tell her to stop licking my arm :). Which is my usual method for trying to communicate with things that do not speak English, these days. Give me enough time,
and I'll be attempting to talk to the appliances on a regular basis. Telling the refrigerator to go fill itself up, wot?

2. I drove a motorcycle today! It wasn't smooth, but it's my second time driving around on one, and I was shifting gears all right. Got to work on my starts and turns. But I think by next week, I'll buy the bike I was trying today! It's a cruiser. Green. 150 cc's, a sissy bar, and no saddlebags. YET. Do you smell a road trip with Tina down to Kenting? Cause I sure do. When I get confident, I mean. Give me a few days. Pictures are coming...

3. Ran a half marathon! Feel good about the time. 1 hour, 53 minutes. My legs hurt a lot afterwards, though, cause I didn't train very much at all. Still, better than last year, I think!

A letter came out of Army Service Forces HQ, on Governors' Island, asking Al Postrel to report to Bonaventure College.
It was delivered.
He opened the letter. Terror.

The return address was stamped,
WAR DEPARTMENT.
How do you return (from) that?

1. ...ORDERS for the Army Specialized Training Reserve Program...
2. Purchase your own ticket...no later than 1900 HOURS...7 JULY 1944...reimbursed at a later date.
3. ...you are directed to REPORT TO THE Train Commander.
4. ...It is to be understood that you are being ORDERED TO COLLEGE.
5. WAR department scholarship...PROVIDE YOURSELF with civilian clothing.
6. ...present this letter as AUTHORITY for reporting.

The letter was awkwardly shaped
in his brain. WAR.
How do you return (from) that?

He had twelve days.
Posted by Catlard at 12:28 PM No comments: