I thought as a matter of historical record that I would start recording my daily progress on the Living Room here. Here's the version message for today: 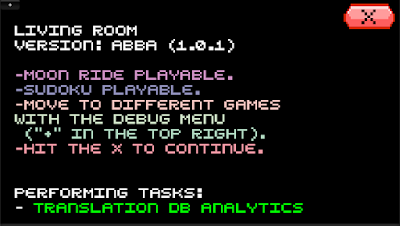 Every time we build, a message like this pops up at the beginning of the app to tell you what new stuff you're about to see.

Today I felt like every game had 10 million little things to fix! I was hoping to get all the game stuff done this week, and be ready to move on to programming the living room UI (menus, etc) for the next week. Hopefully I can get to that point by the end of the week -- there's still a lot of work to be done on the actual living room in the game! So we'll see what happens tomorrow, if I can get through a decent amount of stuff.

Smash Bros is out, and it's taking up some time as well!
Posted by Catlard at 11:58 AM 1 comment:

My accomplice, Jose, said he might want to make a Sudoku game for the Living Room! Could be a great little game for the first release. I drew this when he told me what he was thinking. We aren't sure whether we'd want the game to dynamically generate puzzles (smaller!) or have a database of them (easier!).

Posted by Catlard at 7:02 AM No comments:

We, sinful salivators,
penetrated by Television
folding our hands on weekends
asking please remove
the seed of joy, the thorn
that makes us want ourselves.

Who taught you to love yourself?
You can't name them. You don't need to.
All humans are shapes,
all shapes have complements.

It's hard to name yourself.
But there's nothing else!
Lava drinks steel and farts out
identical charred suburbs.

Make something broken.
Try to fix it, but
twist and break yourself.
Write a word.
Each silver, graphite curve
is an indulgence.

Posted by Catlard at 7:44 AM No comments: 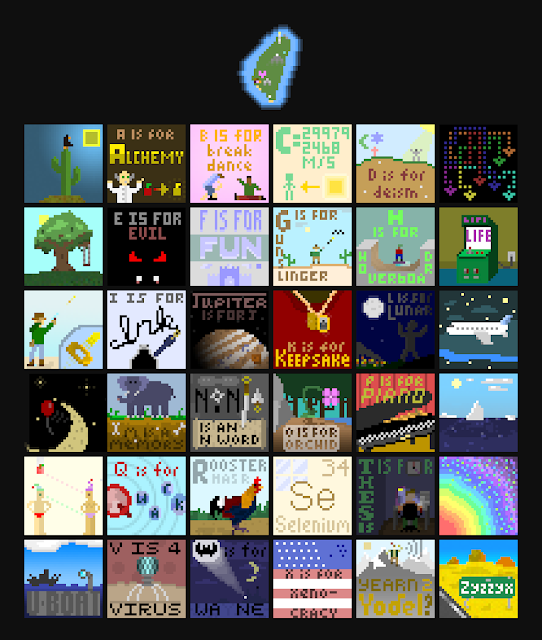 Posted by Catlard at 8:00 AM No comments:

SPOILER ALERT: Breath of the Wild is pretty OK.

I've just "finished" Zelda: Breath Of The Wild on my new Switch. So far, I've spent somewhere around 45 hours on it -- less than some of my friends did. Having "finished" the game, I think I'll need some time away before I come back to it. I will come back to it eventually. Certainly there's enough content in there with the DLC -- an entire continent's worth of lore, scenery, and questing to be done. In general, I was about 67% overwhelmed with how awesome it all was, and about 33% disappointed. Why the disappointment? Well, Zelda just narrowly misses being a masterpiece. More on that in a moment.

Few games even try to be as genuine as it is, or as beautiful. So for a game of Zelda's magnitude to even kneel on its own is as a human artistic achievement somewhere on level with the completion of the Egyptian pyramids. Anyway, during the 67% of the time where I was overwhelmed with the awesomeness, I was:

BUT, I said that it can almost stand on its own. It's almost there. There was this lin(k)gering feeling while playing that the game was still clutching some vestigial concepts, and suffering from some aggravating loops in gameplay. The 33% of the time when I was disappointed (and I remember every heartbreaking minute of it), I was:

So these are a lot of small points. They're evocative of my bigger joys and concerns about the game. In conclusion, I'd like to make these points clear, and also compare the game to two others that I think bear comparison.

Original NES Zelda vs. Breath Of The Wild: When you think about it, these two zelda games are probably the most similar in the series. Little explanation about how to play, overwhelmingly large overworld (when NES Zelda came out, it was overwhelmingly large), a lot of respect for the player's agency, lots of secrets, not much plot, and you start out in a cave and meet an old man who gives you your first weapon. Breath of the Wild takes all this to fantastic new heights. There's also something strangely lonely about both of these games -- in fact, some of my gripes about Breath Of The Wild would be taken care of, if only there were fewer gosh darn people around after the apocalypse.

Hyper Light Drifter vs Breath Of The Wild: In my opinion, Hyper Light Drifter has everything Breath Of The Wild lacks, and all of its strengths. It's a superior game. Sure, it's not 3D, but this is a distinct advantage in terms of pacing and action. Nothing is more boring in Breath Of The Wild's combat than waiting for the camera to rotate around while you look for an enemy you've lost track of.  I wanted Breath of The Wild's combat to be more fine-tuned than it was. Instead, you hit the same button four times, or bash the same metal box into the same guy, or hide behind the same pillar so the guardian turret can't get you. You could argue that Hyper Light Drifter has repetitive animation, but the game is extremely good at making you consider the space you're in, and reacting quickly. Breath Of The Wild has a lot of "OK, I"m hitting you, and then you're going to hit me, and then I'm going to eat a defense-boosting seafood meal in the middle of battle so I can land the last hits that will kill you." This is the game's mechanics breaking down -- they're just not nuanced enough. If Breath Of The Wild was better about combining enemies in fights, or getting enemies to work together, or even if it just disallowed the player from consuming food in battle, goodbye realism, that alone might balance out the combat and make it more fun. It's also worth noting that, at least for me, Hyper Light Drifter's plot hit a lot harder than Zelda's, though there's even less of it. This is partially because Zelda games come with a lot of baggage. We all know who Link is supposed to be, and Breath Of The Wild never challenges our assumptions about what's going to happen. Imagine what Breath Of The Wild would be like if Link found out early on that Zelda had already died while he was sleeping, and his journey was a mournful revenge story? Or if they already had a kid? No, instead we get the same old "save the teenage princess so you can almost kiss her at the end" thing. Does anybody need more of that? Isn't that Mario's thing? Grow up, Link.

Minecraft vs Breath Of The Wild: Minecraft is a masterpiece of consistent tone -- it's consistent in that the entire world is made out of one thing, and the same rules apply to everything. So the world becomes extremely genuine, because it's obvious there are no "special rules" about what you can do. Breath Of The Wild suffers from this -- you can knock down trees and blow up boxes, but it all feels very "set up" at times. In Minecraft, when you climb a tree, for example, you know you can walk in a certain place, because you can walk on blocks. That's it. End of story. But in Breath Of The Wild, you're never quite sure where the walkable area of the tree begins and ends -- so suddenly, after falling through a branch of a tree, you get this fake impression of your world. You can see the dirty fingerprints of the designer all over this tree, that oddly positioned boulder which is not the same color as the cliff it's on, that rock wall which you can't climb for some reason...

For me, the game's massiveness is ultimately what causes it to be a bit grindy and disappointing, though the scale is majestic and awe-inspiring. It's true that the world is massive and everything in it is pretty well laid out, but there is a lack of focus and content for a potentially mindblowing main quest. What I really love in a game is not the ability to go anywhere, and run 10 kilometers in any direction, climbing up 10 brownish walls, past two moblin bases and a shrine to get to a desert where there might be something to do. To be honest, that sounds exhausting. Doesn't it? Is this what I waited to do while I was at work? No, I love it when I get a really specific experience from a game. When I finally walked into Hyrule Castle, and had the thought, "I have to get to the top of that tower, because that's where I'll find out what happened to the world", that was amazing and good. But then I got disappointed again when I saw that there are 16 ways to get there -- and to do all of them would be a waste of time. I only needed one. Just give me one really good, longish path to take!
Posted by Catlard at 5:32 PM No comments: