So, I've taken a Meyers-Briggs test. It's the first thing I'm doing on my first day off in about 15 days. I was hoping it would help me get some direction for the next few days, since I honestly have no idea what I'll be doing. It's boring and interesting at the same time, because this is sort of what I wanted--to be in the middle of no-where and not have a lot to do except practice music, writing, and drawing. In any case, the test pegged me as an "idealist", no matter what way you slice it. I'm most likely to be an ENFP. For those of you who don't know anything about this test, I'd be happy to send you a copy, if you want. Anyway, here are some interesting tidbits from the bits about ENFPs, which I hold to be very true:

--ENFPs firmly believe that "There's always another way or another answer."

--ENFPs are less productive where there is disharmony because they pay more attention to the relationships between people at work than they do to the tasks.

--Most ENFPs will say they are organized, but others might not see them that way. Their desire to be open to the moment tends to outweigh their need to be organized

--For ENFPs, loving is an almost constant state. They are generally involved or in love with someone or something new.
Posted by Catlard at 2:55 PM No comments:

You have noticed
that everything an Indian does
is in a circle, and that is because the Power of the World
always works in circles, and everything tries to be round.

In the old days,
when we were a strong and happy people,
all our power came to us from the sacred hoop of the nation,
and so long
as the hoop
was unbroken,
the people flourished.

The flowering tree
was the living center of the hoop,
and the circle of the four quarters nourished it.
The east gave peace and light,
the south gave warmth,
the west gave rain, and the north
with its cold and mighty wind
gave strength and endurance.
This knowledge came to us from the outer world with our religion.

Everything the Power of the World does is done
in a circle.
The sky is round,
and I have heard that the earth is round
like a ball, and so are all the stars.
The wind, in its greatest power, whirls.
Birds make their nests in circles,
for theirs is the same religion as ours.
The sun comes forth and goes down again in a circle.
The moon does the same, and both are round.
Even the seasons form a great circle
in their changing, and always come back again to where the were.
The life of a man is a circle from childhood to childhood,
and so it is in everything where power moves.

Our teepees were round
like the nests of birds,
and these were always set
in a circle, the nation's hoop,
a nest of many nests,
where the Great Spirit
meant for us to hatch our children.


I added some line breaks, but apparently these words are from a book by a man named Black Elk.
Posted by Catlard at 4:05 AM No comments:

The fully stocked refrigerator at the end of the universe. 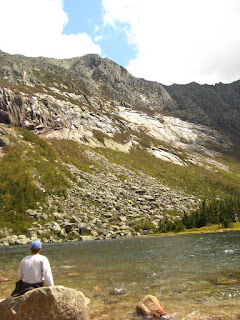 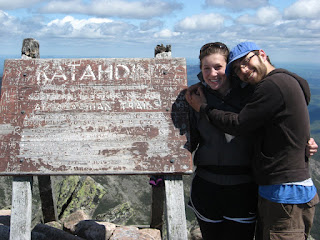 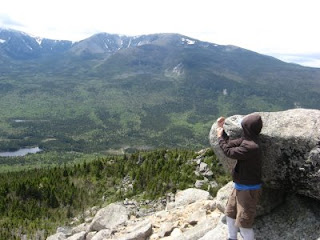 Howdy from York, Maine, my mecca of couch-sitting this week. Well, not exactly, as I'm doing a bit of running and strength training with Matt (my sister's boyfriend). I've also been doing a bit of hiking up at Katahdin, as the picture to the left indicates. Absolutely beautiful plumage on that mountain. We It was great to hang out with my sister, whom I feel more connected with now--we really hadn't spent any extended amount of time hanging out since I left for college seven years ago, and now...now it seems we're both fully functional adultish beings! Huh?
Anyway, I'm hanging out at the house where she's house-sitting with Matt, and enjoying the groceries, beaches, and master bedroom I've been given to sleep in. On the 8th, it's off to Key Largo!