Unusual travel suggestions are dancing lessons from the universe. 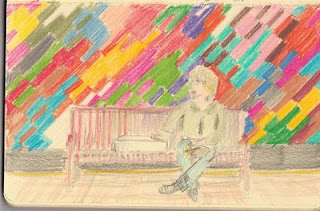 First, what's been going on:


--Went to the educational technology conference! The flight was cancelled from Philly, but I drove down in a rental car with a new friend named Phillip, a guy I met at the airport. We did it in one night, the whole 788 miles, in approximately ten and a half hours. What a lovely, sleepy reality it was. Once there, I met Sarah Robbins, the only currently living person I call an academic superhero. Imagine a PhD candidate in her thirties who would stand up in front of a hundred and fifty professors from institutions around the country and tell them that they have to learn how to democratize , or else become obsolete, and you'll have some idea of why I think she's the bee's pajamas.

--I got a new job, working for Outward Bound's At-Risk program in Yulee, Florida this summer. Blessed be the right hand of justice that decided to help me get out of the Department of Education's evil grip (See poem).

--Finished all of Alfred Bester's short stories, and let me tell you, man, they are a trip. Here's the one I liked the best. I talked about it with my therapist, mentioned that it was somehow a metaphor for my own loneliness, I thought it was so fun.

My ex-girlfriend wrote me a letter
of recommendation
for a job I dreamed I’d get.
Maybe it was an unfair thing to ask for.
I wanted to believe in myself,
If only by proxy.

I got the job.

I announced my ascendance
to the school secretary, the next day.
She said, You've had it?
Wishing for some
(sex)
righteous reversal,
I said, more like It's had me.

When traveling
we leave shining trails of ourselves,
sluggish memories.
Posted by Catlard at 1:25 PM No comments: