That feeling of not being watched. 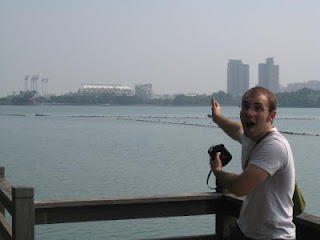 It's been a while, but we're back.
Current exciting news: Taiwan!
Current drama: Details of work, and licensing issues with New York State!
Recent feat over biology: Staying up for over 40 hours (I tried to jetlag on the 26 hours of plane riding that I did, but unfortunately, when it was time for me to go to sleep based on the time in Taiwan, my body said, OH NO YOU DON'T. Hence, I've just slept for 12 hours.)
What I have been doing lately: I went to LA, then came back to RI, decided to sign a contract to work in Taiwan as a teacher, so I went to Florida to see my grandparents, then came back to Providence to get my visa, then went to New York to take a flight out of New York to Kaohsiung, Taiwan, via Anchorage (we flew over the top of the world). And that's just for starters.
Finally, the blogging part of the blog:
Yesterday I arrived at the airport at 8:25 AM, quite tired, and not knowing what to expect from the universe. Would I be put in the back of a van full of other teachers whose livers were now subject to sudden extraction? Would I be immediately arrested for the government on account of my long crime record as an unregistered ninja in Southeast Asia? Would I suddenly be consumed with the urge to restart my knitting! The answers to all of these questions is, thankfully, a giant NO WAYS JOSES. Rather, I was picked up (as planned) by one Mr. Lee Knight, my agent, who proceeded to take me out to breakfast and introduce me to an environmental activist named Tim, who is also working as a teacher. We sped around Kaohsiung on a scooter for the whole day, seeing the sights and basically informing me about everything I would need to be informed about. Worried about your lack of knowledge of cell phone plans, scooter contracts, and tipping in Taiwan? Don't worry, I've got you covered.
In any case, I spent the majority of the day with Lee at his school, which is down the street from his home, where I'm staying and blogging from now. I met teachers, observed them, and went out to dinner with them, before my dramatic collapse into a bed. All in all, I was very impressed with the hospitality and concern for my well-being that Lee has. The next few days look like they're going to be filled with good stuff. Friday is more orientation and scooter driving practice, Saturday is hanging out with Ash, a teacher who I observed yesterday, Sunday is heading for the beach at Kenting (possibly with Tim), Monday is getting a health check and visiting the school in Cishan (pronounced Chi-Shan).
----------------------------------------------------------------------------------
The new system I'll use for photos is this: I'll be putting flash slideshows up from now on, and they'll do what you see below, if you have flash. As a one time only amazing incredible offer, I will also link to the same photo album today, in case you don't have flash, for some wacky reason. HERE DA LINK.


Some of these photos were taken while riding my bike in LA, some of them on the plane to Kaohsiung, and some of them at Ching-Cheung Lake (pronounced like the cash-register sound) right here in the city. I haven't taken any pictures of the really awesome temples yet, but we'll get to that.
Oh! And I don't know how often I'll be updating this blog...probably it will be once every few days. For those of you who haven't been reading this blog since its conception (which would be either my parents, or none of you), I originally started writing this to inform people about what was going on in my life in London, when I studied there about 4 years ago. That was how we did it then, and dang gone it, that's how we'll do it now.
-----------------------------------------------------------------------------
Mandarin character of the friggin' day: STOP. Guess why it's important if you're riding around on a scooter? 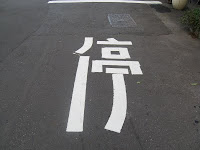 The character for STOP symbolizes what squished scootist looks like having failed to heed sign left by previously squished scootist. And yes, Dad has read all the blog entries all along ...

YEEHA! You sound happy brother man. Keep on scootin' on. (Oh and email me about a skype date this weekend?)

yeah,yeah,yeah..you sound so happy and stimulated. just what the doctor ordered after those bummers..so happy for you. yes, we, your loving grandparents read all your blogs from london all the way around the world.
keep em coming..