I was feeling like it was the end for me. So he said, tighten the fuck up, do a second course. We kept drinking. 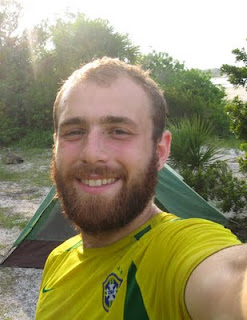 Aaaaaand we're back. Course ended 3 days early, because the entire group had caught scabies/MRSA/Staph. We (the people doing the course) will never know exactly what caused the outbreak, but we suspect it came from some mud that the kids were flinging at one another on day 11. So, although I've been doing nothing but talking about the last eighteen days of my life with everyone down here, I figured I owe at least a cursory explanation here.

Basically there were supposed to be 11 kids, 9 showed up for the course, and one was removed for continually running away and being generally unsafe. The course lasted 17 days. We did on average about 5 miles of canoeing a day (a very small amount, by most standards here). The lead instructor was named Wade, the assistant instructor was named Tony, and the third instructor was yours truly (that guy with the beard on the left). Ultimately, I felt like I really enjoyed watching the kids change and struggle through the experience, but felt very disempowered by how little I knew about what was going on. Wade ended up driving (leading the group) for most of the beginning, which was good and necessary, but I guess I'm just disappointed that I wasn't more capable considering how long I've already been teaching. I also didn't get my promotion to assist, which means I'll have to do another course if I want to get a contract or if I want to get paid more than 125 a week. Which is fine. I can live on that. Just means a more scrappy lifestyle, and a slower route to owning a car/motorcycle. As far as the kids...mostly there were issues of integrity and passive communication that we had to deal with. There were no instances where people became physically aggressive. It was mostly pretty calm, and we saw the kids holding each other accountable for their communication/integrity issues at the end of course. We'll still be doing followup (10 days of massive paperwork/visiting each kid's house 4 times and meeting with the families), but other than that, not much to say.

To be honest, I felt completely run over by the whole experience, and the last few days I've been considering not working here any more...I wonder if this is the kind of feeling that people recover from. Unfortunately, due to legal craziness, I'm never allowed to post pictures of the chillins on the internets. But if we ever hang out, just ask me and I'll show you all the videos and stuff. Yes? Now, it's my first day off in a long while. I've made an alcohol stove from an aluminum pepsi can. I went and looked at some outdoor gear, but left the store knowing I was too smart to buy most of the things I could just make myself. I don't have much money I feel more impressive and perhaps more unimpressive than I ever have.

Finally...Rufus Wainwright, anyone? I'd never heard this song. Kind of like the video, though.
Posted by Catlard at 11:04 PM

That is some fucking crazy beard. Wow. Manly.


At what point do you give up trying to calm an ever-shifting tide of feelings, and focus on a mission that transcends them? Even if the grunt work required by the mission makes you feel like shit 80% of the time, and has no guarantee of success?

THIS ERICK AGAIN DON'T DRINK. CINK ABAUOT WHAT YOU SHOW AS TO DON'T GOU FOR BAD THING. DO GOUD THING