We've been asked to write our own brief as an assignment for my program--that is, a description for an animation project we might receive as part of our course. It must be based on the idea of Space and Environment. Here's mine: 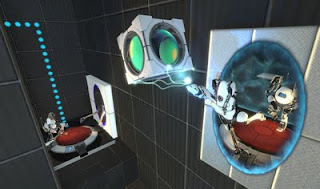 The goal of this brief is to create an animation or interactive work that uses space and/or environment as its protagonistic element. A successful response to this brief will ask the user or viewer to think about the space in which the work exists while they are experiencing it. An unsuccessful response will
MOTIVE:

Exploring the ideas of space and environment in an animation or interactive has many functions. Space and environment can, among other things, be used as a means to:
a) Challenge the player or viewer by asking them to navigate or comprehend it as an obstacle or puzzle.
b) Give the player or viewer room to express themselves or be affected by the animation/interactive.
c) Organize a work by dividing it into different zones or distinguishable features.
d) Give the player or viewer a system or world in which the rest of the work exists, thus allowing them to decode certain elements.
e) Enable the player or viewer to create a structure in which the work exists.
f) Set the scene.
Making the space or environment in your work an integrated element allows that work to become a more completely unified idea. If your environment and the other elements in your animation/interactive are working together to enhance the user/viewer experience, they will both benefit many times over, and the world of your work will become more real and consistent/persistent.


Your animation may be any complete work which addresses the idea of space and environment as its primary or protagonist element. It may contain other elements apart from that space, but they can only be in service of the viewer experiencing the "world" or "structure" of the work. For example:


Consider the rpg flash game grOw, in which the user must cause an environment to evolve in steps by choosing the order in which they add elements. In this interactive, the environment is the protagonist, which the user is always watching, and the characters are merely devices which interact with the user-generated space. Another example of a game which does this successfully is This Is The Only Level.


The flash game Canabalt, on the other hand, would not be an example of an environment being a protagonist, since our focus is on a character who is, while very well integrated into his environment, separate from it and the most important element. One might argue that it is merely a matter of perspective. But there is a huge difference between a game in which the player is acting as a runner exploring a destroyed space, and one in which the player is acting as the city, causing the runner to react to it by cueing environments, as they must in games like Solopskier.


As far as animations which successfully use environment as a protagonist, be sure to have a look at Walk Smash Walk, or The Scale of the Universe.


There are a few requirements for your project:


You will be assessed based on:


Submit the project to the server, or provide another means by which the lecturer can access your work.


Clearly, interactives and animations will use different media and different formats. Preferably, however, the viewing area for your animation should be 1280x720 resolution.