Three things:
1) Yesterday I completed my drawing, but I hadn't finished the flash code for it yet, so it wasn't ready for public viewing. But now I've finished it, so here it is! Feeling green?
2) I finished the cutout movie with my group! It's called Pixel Critters. That's the second project for our program. First, watch it. Then let's talk about it.

Laura, Isis and I all worked on it together. We each created a character--I the cockroach, Isis the caterpillar, and laura the mouse! We also each did parts of the set. I did all the sound, the intro, and the work with the pixels during the movie. Laura and Isis are extremely talented artists--I don't think it could have looked very good without them. I feel like the movie is strong structurally, but weak on timing and the motion is very...sort of spotty. Some parts are alright, but I think because the pace is extremely fast in the movie, it's hard to pay attention to the motion, if you're the viewer. Part of it is that one affects the other, I suppose, but I think that there are slight problems in both areas. I still like it, though! What do you think?
3) So, I had a talk with my friend andy about my story grid project, and I think we've reached some important thoughts there. Firstly, I think that some of the grids are better viewed wholly, and just looking at one frame at a time takes away from the experience. I'll post some examples here to give you an idea.
a) This is better viewed as a large picture, as it's better to look at it and know where you are in the story: 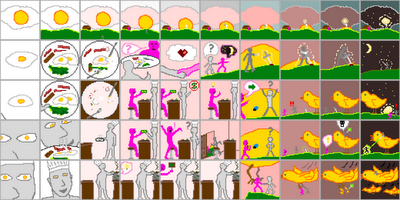 b) This one is better viewed in the player, I think, although I also like looking at it. 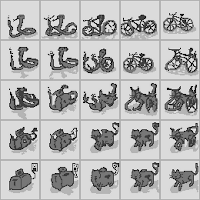 So, I wouldn't assume that either of them are worth looking at anyway :), but perhaps you can see what I mean? The point of my project was to design an animation, anyway, not a grid of pictures, even if they are in sequence. So I'm a little disappointed that they aren't all best viewed as animations. I'm not sure at this juncture what would have made them better viewed as animations, but what do you think?
Posted by Catlard at 11:50 PM

You did an awesome job. Keep up the great works. I love it.

I thought you guys did a great job with the cutout animation, and the continuity was great. Encore!

Aw, thanks, guys. This is the most comments I've ever had on a post! Jin, although your blog isn't accepting comments for some reason, I really enjoyed the video about the Disney keyframes in that scene. I thought the shapeshifting was really amazing. Let's talk about it tomorrow! Karis, thanks to you, too! I look forward to seeing yours guys' animationses tomorrow! Cheers.