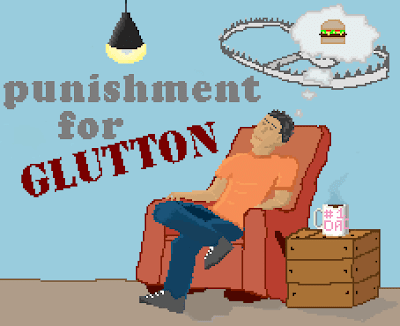 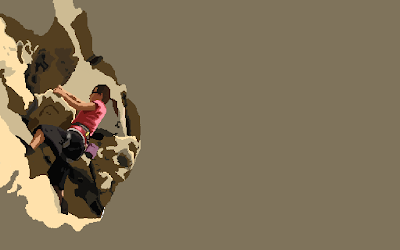 Howdy, folks.
So, two items today. First, some color.
This was a picture for my dad's blog. I like how it came out.
I made this out of a photo of Tina rock climbing the other night...so she could use it as her desktop. I like the way it came out. You'll want to click on it and make it bigger. I always hate that about pixel art. It always looks like there's a messy little spot on your web page unless it's blown up. Czech it:
Second, some talk of agent + behavior projects:
The latest large project I'm embarking on is a sort of adventure language learning project. I'm working with Lahta, a marvelous, prolific art deity person that is also of the teacherly persuasion. The idea of the project is to create a sort of game for people to play that will teach them basic words in different languages by attempting to give them basic commands. The user will be able to direct a cat to respond to its owner's commands. So, for example, if the owner tells the cat to "Drink" and points to the wat
er, the user must click on the word "drink" and then on the water. The program would ideally present the user with a number of words like this, and then the cat would go to sleep (as cats often do, against orders) and night comes. When it does, either the cat's imagination or the spirits of the house start acting up (we haven't decided which yet) and ask the cat to do the same thing the owner do, but in an assessment context. This different phase of the game will probably punish/reward the user (playing as the cat) in some way.
ANYWAY, Lahta's working on the cat at the moment, and I'm working on the ghost. We have 3 weeks to do a sort of character study and create some animations which will act as an asset library for the larger project. Tomorrow we're presenting some basic ideas about what the characters might look like, to each other. Here are my ideas about the ghost: 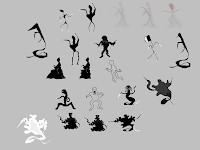 Again, you'll want to click on it to make it bigger. I tried a range of styles with this character, but personally, I think the most successful version (which may or not be here yet) will combine a wispy, vaporous element with a sort of knifey, insectile arm aesthetic. I also want the whole character to look kind of like a stain on the objects around it. The less visible stuff on top is supposed to represent that. So far, though, I think of all of this, I like the bottom left (white) ghost idea. I think tomorrow I'll have to do more drawings like this... to explore it before I meet with Lahta. I don't know if whiteness is going to stand out in the right way from the dark parts of the room that it's going to be in. But maybe the visual element I'm really looking for is opacity, which is why the whiteness seems to work. That's all for now. Got to go with my flatmate to steal some chairs from a dumpster. Yes, at midnight. No, you can't come :).
On whiteness, from Moby Dick...
Posted by Catlard at 12:34 PM